06 Sep The History of Dental Implants

Posted at 16:00h in Dental Implants by dentaladmin

Dental implants may seem like a marvel of modern technology, but in reality, they have a long, winding history. For as long as there have been people, there have also been people unhappy about losing their teeth. To understand why we use the implants available today in the 21st century, it’s important to look back at the history of dental implants. 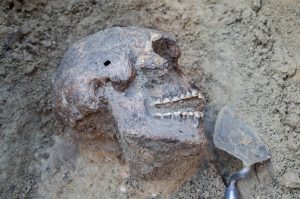 As hard as it may be to believe, humans have been trying to improve our smiles for thousands of years. Over the years, as scientists have explored ancient history, they’ve made some amazing discoveries related to ancient people and their teeth.

One fascinating discovery from the Mayan culture was the idea that dental implants could become permanent fixtures in the jaw. In 1970, scientists took a closer look at the Mayan skull excavated in 1931. They’d assumed, up to that point, that the seashell “teeth” had been inserted after the person died. In fact, they discovered that they were implanted during the person’s life and bone had grown around the shells. This would be an important aspect of dental implant success in the future. Known as osseointegration, it means that the implant fuses to the bone and is not rejected by the body. 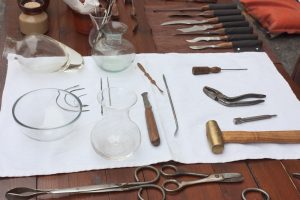 Ancient people weren’t the only ones experimenting with dental implants and other repairs. Between the 1500s and 1800s, people purchased loose teeth from poor people or took them from cadavers in an effort to replace their missing teeth. These attempts failed due to infections and the body’s rejection of the teeth.

Over time, doctors and scientists began to look for more permanent and successful solutions than taking teeth from other people. In 1886, a porcelain crown was mounted on a platinum disc. It was rejected by the body but it was one of the first attempts at a more standardized dental implant.

By 1913, doctors were still working on the problem of a dental implant that could fuse itself to the bone. Dr. EJ Greenfield developed the first implant that’s most similar to the kind used today. It was a platinum and gold cylinder referred to as an “artificial root.” In the 1930s, two doctors, Alvin and Moses Strock, experimented with a chromium-cobalt alloy known as Vitallium to restore individual teeth. Again, due to lack of osseointegration, their efforts were unsuccessful.

The Development of Modern Dental Implants 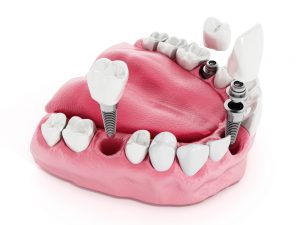 In the 1950s, dental implant capabilities took a big step forward. Dr. Per-Ingvar Branemark, an orthopedic surgeon, was studying bone healing and regeneration when he made a startling discovery. He tried to remove a titanium cylinder from the femur of a rabbit and couldn’t get it out. Bone had grown around the titanium and fused to it. Properties within titanium allow osseointegration to take place.

In 1965, Dr. Branemark placed the first titanium dental implant in a human volunteer. This push forward sparked rapid research, development, and improvement in dental implants. Modern dental implants use a screw made from titanium alloy. It’s usually roughened surface to make it easier for the bone to fuse to it. A screw is attached to the jaw where the tooth used to be. Once that heals and the screw and bone have grown together, a post with a crown on top is inserted. This is the dental implant most people are familiar with today.

The man has been inventing and innovating based on our needs since the world began. It should come as no surprise that dental health has been a part of that inventive journey. When you know where people began in their efforts to implant new teeth, it makes the titanium dental implants used today that much more impressive. ingenuity and an unwillingness to give up, dentistry have solved the problem of dental implants.

Find on our blog: